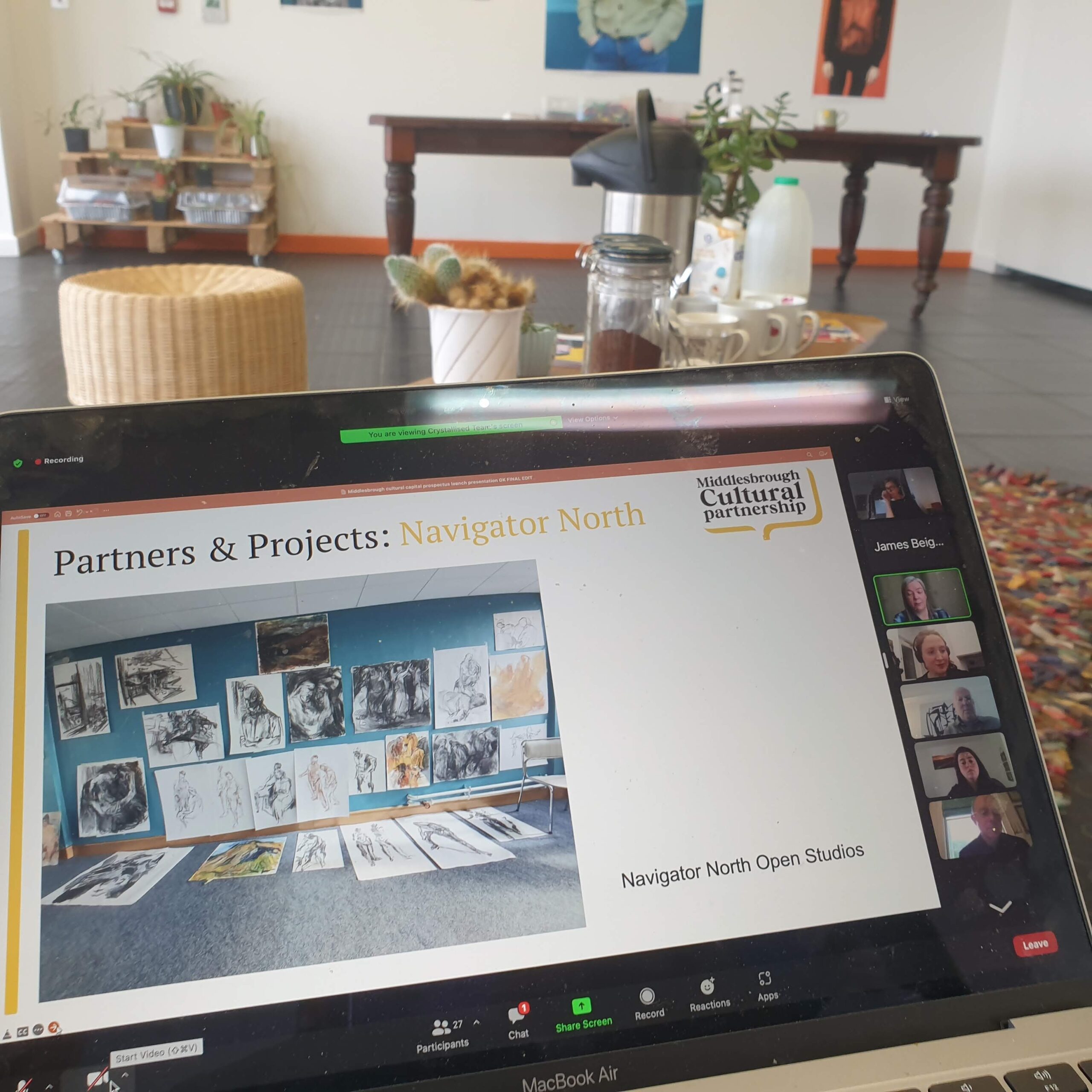 Hi, I’m James and I run an organisation called Tees Valley Arts. 40 years ago, Tees Valley Arts (then called Cleveland Arts) was established in Middlesbrough and there it remained until just two years ago, taking the short trip down the road to Redcar to operate a gallery space on the seafront – its first time running a venue.

It’s 20 years ago that I moved up to the area, in many ways starting my career in Middlesbrough and the town has very much felt like home to me ever since. And so as I log on for the online launch of Middlesbrough’s investment prospectus (download the prospectus here) I’m sat in my gallery space, laptop on knee, surrounded by portraits of young people by Casey Orr as part of our latest exhibition and keeping half an ear on the talk taking place in our back gallery space. On my screen a row of faces gradually appear, mostly familiar faces – some just names in a box as their camera is switched off. The scenario reminds me how much we are still in flux: an in person talk in a gallery that is open, an exhibition about young people out and about and an online launch, in the “room” with people some of whom I have not seen since the start of the pandemic – no opportunity to say “hi” and shake hands. Yet would we have been able to get all these people in a room together otherwise? A quick glance at the participants list showed the elected Mayor and Deputy Mayor, the Council’s Chief Executive together with senior figures from the Arts Council and from other cultural partnerships in the North East.

This is important. Almost the final words of the event were from Charlotte Nicol, Middlesbrough Council’s Head of Culture – “Let’s do this together.” And it is the success or otherwise of this “togetherness” that the transformation of the document from a moment of optimism to a sustainable future will depend. Those who presented represented the town’s institutions and they represented the town’s individuals. Perhaps in-between were those that have quickly come to be seen as part of the town’s establishment for the great work that they do, a fact that may belie the tiny number of people and modest budgets that keep them running.

If there was one theme that united all the presentations it was the idea of home. From the artist Will Hughes who declared themselves “Proud to call Teesside my home” to Bini Araia from The Other Perspective CIC who talked about creating a space that could feel like home for newly arrived members of the community. Underpinning the idea of home was the sense of stability and permanence. Vicky from Navigator North explored this idea as they expanded from operating “meanwhile spaces” as artist studios to taking on a venue for the first time, whilst both Stephen Irving and Graham Ramsay from Pineapple Black and Base Camp respectively talked of the challenges that can come with any uncertainty of the tenancy of your home. Both face the matter stoically and have articulated a vision that for an active future. Anna Byrne and Liam Slevin from The Auxiliary and Bini both talked about the levels of investment necessary to secure their spaces and to make them homes: 6 or 7 figure sums can seem eye watering for small organisations used to surviving on far less and yet it was a timely reminder of what incredible impact can be achieved with amounts that seem really quite modest compared to the heady days of arts capital funding in the late 1990s.

Undoubtedly then this new investment prospectus captures a moment and an energy that is creating a truly exciting art scene, one that can, to use Graham’s words “can look anyone in the country in the eye.” Is it sustainable? It was left to Elinor Morgan from MIMA and to Alison, a volunteer at Ormesby Hall, to remind us of something of the long view of arts around Middlesbrough – that great projects, ideas and people have made Middlesbrough their home from the start. But if something does feel different this time it is that we are witnessing an art scene that is ready to go, where the talking, sharing and thinking has been done honestly and where people have one another’s backs. There will be stumbles along the way I don’t doubt but if this spirit of togetherness continues then let’s look forward to joining in with Middlesbrough ambition to be “the most creative town in England.”